“Regolith” is a general term used to refer to all weathered earth surface materials extending from the interface with unweathered bedrock at depth to the surface (Eggleton 2001). It includes in situ weathered material derived directly from the underlying bedrock, and transported material derived from both bedrock and other regolith materials, and in many ways is similar in its usage to “surficial material”. Integrated regolith studies are relatively new (Ollier and Pain 1996, Eggleton and Taylor 2001) but regolith materials have been studied in a number of disciplines for some time. These disciplines include pedology, geomorphology and aspects of sedimentology, but rarely traditional geology. Regolith Regolith is very closely associated with landforms, which makes a landscape approach to regolith mapping most appropriate6. Landforms and regolith are formed by essentially the same groups of processes, and once the inter-relationships between regolith and landforms are understood, landforms can be used to predict regolith patterns. Thus landforms are used as a proxy for the largely hidden regolith. This means understanding the dynamics of the present landscape. It also means understanding the dynamics under which relict landforms and regolith materials formed.

Regolith-landform mapping is an approach to describing the earth’s surface in terms of both landforms and the surface materials, whether of transported material, weathered rocks, duricrust, or fresh bedrock. The techniques of regolith landform mapping have been developed in Australia (Pain et al., 2007, Pain 2008), and have proved an important part of terrestrial field study of surface materials, landscape, biota, and hydrogeology. It is also an essential platform on which to base more specific applications, such as civil engineering, hydrology, resource extraction, landscape ecology, or geophysical and geochemical research. Regolith-landform mapping can be readily applied to the regional to the site scale.  The method can also be applied in Mars analogue environments and to the surface of that planet (Clarke and Pain 2004).  Regolith-landform mapping has been developed largely in temperate, arid, and tropical environments, one of my aims while at FMARS is to extend the technique to cold climate environments, building on experience gained in Ladakh in the Karakoram in NW India in 2016.  Improved mapping in such environments is especially relevant to characterizing sites on Mars.

On arriving at a site a reconnaissance of the area gives a good idea of the general features of the landscape, and allows you to place the different regolith materials in context. It also allows you to check the general relationships between regolith and geology. Observations of the landscape (in its broadest sense) can give a lot of detail that is useful for explanations of the landscape – its origins, active and relict geomorphic and weathering processes, and any information that will allow extrapolation to areas you will not be able to visit. In most cases it is possible to extrapolate your observations from accessible areas into areas that cannot be reached. Wherever possible, use riverbanks or other exposures for your observations of rock types and regolith.

An example of regolith-landform mapping in a cold climate is shown in Figures 1 and 1.  Both are from the Ladakh region, using public available data. Figure 1 is a map of an area, and Figure 2

Figure 1 shows an interpreted ground level image of a steep, glacier headed valley, Figure 2 is an interpeted Google Earth image of the same area.  The units consistent in each Figure. 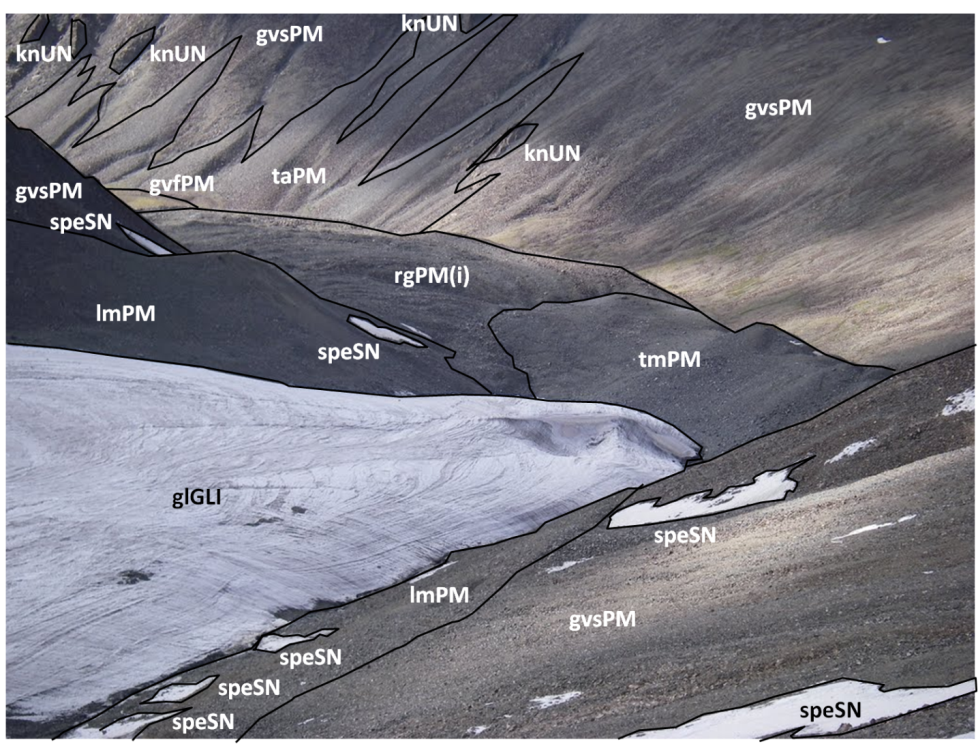 The units in Figures 1 and 2 are as follows: 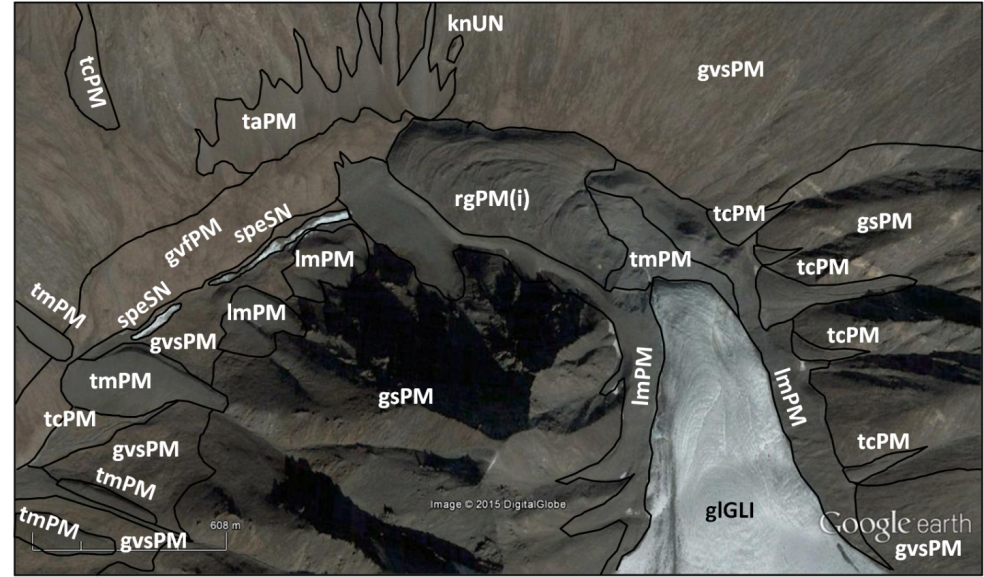 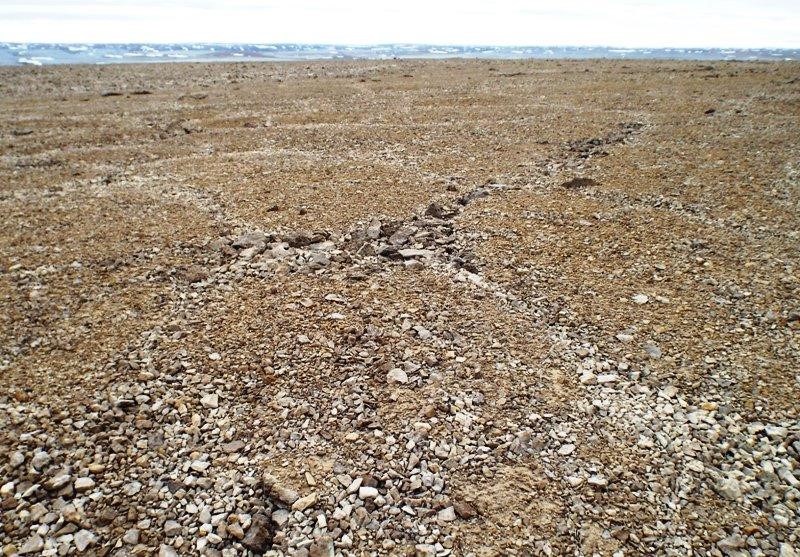 Figure 3. Hierarchical networks of sorted stone polygons on the slopes of Haughton crater.  Larhe rocks define larger polygons, smaller polygons are defined by smaller rocks within the larger polygons.  Features such as these are the focus of study by Paul Knightly on this expedition

This methodology will be used to characterize the regolith landform units of specific sites at Haughton Crater from data collected during our expedition and building on earlier work in the area such as that of Lacelle et al. (2008) on the polar desert landscape of Haughton crater and Dyke (2001) on regional mapping of the surficial geology.  Examples of some of the local regolith landscape elements are shown in figures 3 and 4. 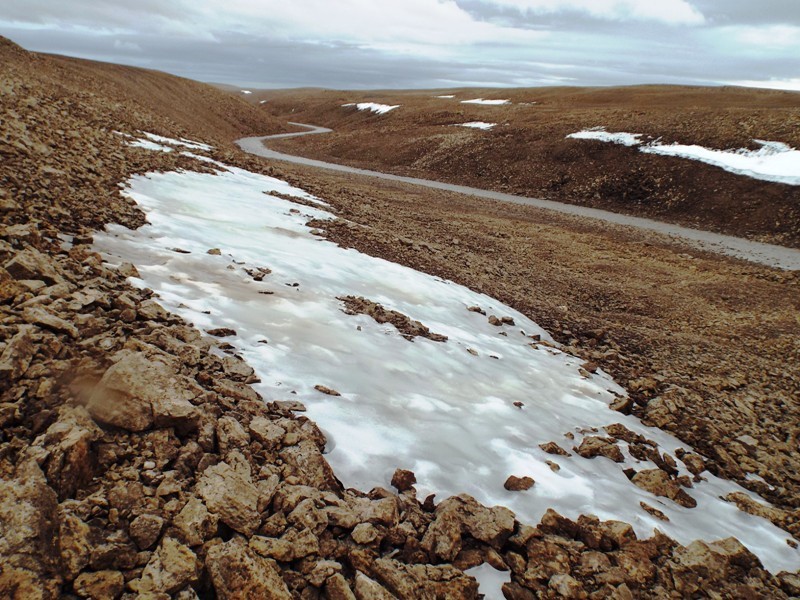